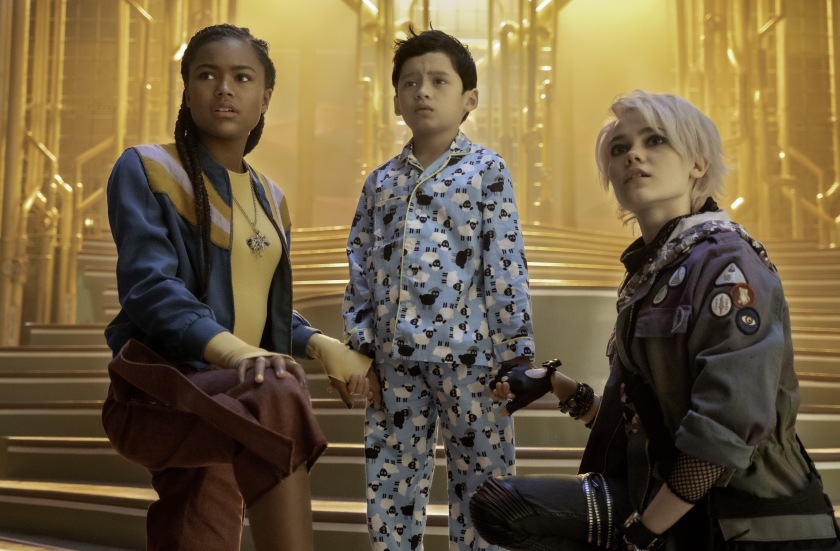 When it comes to babysitting, Kelly Ferguson is a pro, but when the boogyman himself kidnaps the child Kelly was meant to watch during his parents Halloween party, She will need to enlist the help of the hero organization of babysitters to rescue the child while also getting him back in time before his parents return. In this new kid’s spooky film from Netflix, the film hearkens back to the old Disney channel original movies that I grew up on, but fail to leave a lasting impression on me in the end.

Firstly, I must acknowledge that this film is not made for a high-brow film fanatic. It’s for kids and Netflix is only interested in entertaining kids who want to watch something spooky but won’t traumatize them for life. The story for the most part is fairly entertaining, based on the book by Joe Ballarini. I thought it was interesting seeing a, dare I call it, ‘Babysitters Club’ of super kids that use their smarts and a little bit of magic to take down the boogyman and his CHI henchmen, who look like a slightly melted version of the ‘Monstars’ from SpaceJam. Little did I know that a classic kids villain actor would be involved, let alone Tom Felton, who played Draco Malfoy in Harry Potter, now playing singing, dubious ‘Grand Guignol’ (boogyman). I think he did a pretty good job albeit again, this is a kids’ movie and he treats it as such. How much is Netflix paying these Harry Potter actors to be in their films, btw? We had Dudley in ‘The Devil All The Time’ as well as a couple of other Netflix originals and now Tom Felton in this, I cannot wait to see who is next up in the original films acting slate!

The kids all performed very well, the lead actress Indya Moore being very likable as the Kelly and also giving a very heartfelt performance. The kid that is kidnapped played by Ian Ho also does a good job with his performance and worked well alongside Tom Felton. The set design feels similar to something you would see from ‘The Santa Clause’ workshop and seems kinda toy-like and plastic, and the costume designs are okay for the most part.

I would say for kids this film may be a knockout or could knock them into a slumber. When you are a parent, I think either is preferable and something that could easily be put on for the kids to watch and have a good time with. For myself though, it is going to be gone from my memory in the next few days (if not less).