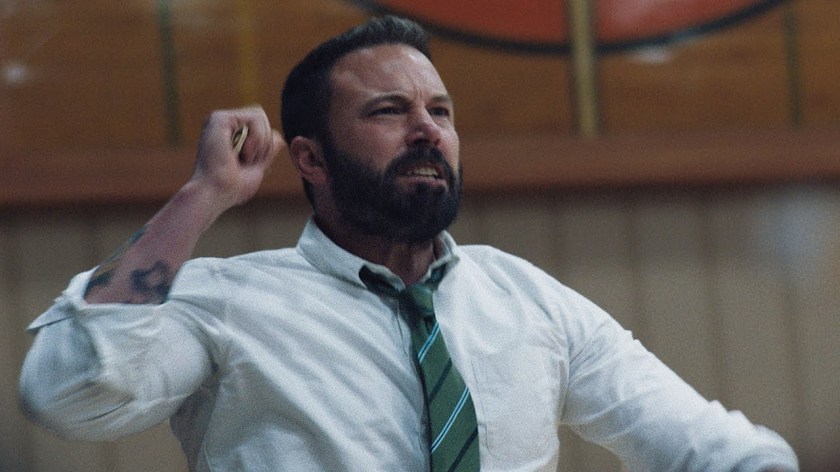 The Way Back is about demons of the past haunting everyday struggles and being trapped in a hell where isolation is the only level of comfort to remain sane. It’s a movie where Ben Affleck is able to showcase his talent in a way that has not been seen in recent movies of his. What he is able to bring to the movie and to his character is grounding and depth. From being a vulgar, abrasive, alcoholic to a man who internalizes all pain and regret. He’s careless, he’s weak, and above all, he’s fragile. The Way Back offers insight on a character who masks his pain. It’s an interesting character study and the rawness Affleck brings to the table only makes the story more impactful by the end.

On the surface The Way Back doesn’t necessarily bring anything new to the table. A tormented man coaches a team and both find solace in each other. We have seen that before time after time again in sport dramas, but what differentiates The Way Back from any other generic form of storytelling is how the filmmakers go into great depth of Jack Cunningham (Affleck) and explore areas that are often missed in these sport dramas. In a lot of those movies, something is always at stake with either the player or the coach and we get to see them fight against the conflict to come up as the greatest of all kind. Director Gavin O’Connor refuses to let The Way Back tread on those lines by introducing a character that has already lost it all. Instead of asking how Cunningham is going to win the fight with his own demons, we instead wonder what more does this man have to lose? Even when Cunningham takes the helm of coaching the basketball team, the team doesn’t necessarily provide an answer or solution, they just act as a step toward a direction of some sort.

Ben Affleck really does bring something to the table with this movie. Be it from his own experience with having to deal with alcoholism, or him reaching inside himself to cope with his own personal demons, whatever he touched or allowed himself to express really brought out the best of his acting skills I have seen in a long while. It’s hard to convey internal conflict on screen to be cohesive and still hold its intricacy while being interesting at the very least, yet Affleck does so with what seems to be ease. It wouldn’t be fair to not give Affleck’s co-stars like Al Madrigal as his assistant coach who has to keep an eye on him, or Janina Gavankar who plays his wife who also shares the same kind of regret and resentment that Ben Affleck’s character has…the only difference is she’s able to cope with it in a healthier way.  They keep the balance and prevent this movie from being a full fledged melodrama.

The cinematography in this flick during the basketball games is energetic and fun. It closely resembles O’Conner’s film Warrior with fast handheld cuts. What this type of cinematography allows is for the rawness of the film to seep through. O’Connor often likes to shoot close and personal to the subjects in the film and cinematographer Eduard Gau really likes to hit the punch and get us as close as he can to hone in on O’Conner’s direction and Affleck’s acting. There is great balance throughout the film of these high energy sequences and of isolated moments where Cunningham drowns his sorrows or interacts with those closest to him off the court. And with this balance we are able to see two sides of Jack Cunningham and quite frankly Ben Affleck in general.

I had little issues with the third act, specifically when we are shown why Jack Cunningham has so much tenacity to be self-destructive. The reasoning, although believable and heart-wrenching, came off as a little surfaced and not as in depth as the rest of the movie. That’s the drawback of having been so focused on his character through the entirety of the film, there really isn’t a viable way of making a twist (if you will) be right in the gut, when it definitely feels like it should have been tugging hard at the heartstrings upon revelation. At the very least there was an understanding in his character and perhaps that is the biggest compliment the filmmakers were aiming for. So, in a way, that is a compliment in itself despite my personal heartstrings not being cut clean, and a part of me really appreciates O’Connor and company not going down that path because surely that would have been the final nail in the coffin to make the movie more depressing than it already is.

Gavin O’Connor really has a skillset of directing these sports dramas like Warrior and The Way Back, by providing them with characters who are not only relatable, but flawed and have purpose. Each character makes a decision and each character has to pay consequences in some form or another. This is most certainly true with The Way Back. This movie is a journey and by the end there’s satisfaction in one form or another. I thoroughly enjoyed witnessing Ben Affleck go on this journey as he really grounds the project from being too far fetched.

The Way Back is a way forward for sport dramas and for Ben Affleck. I would highly recommend watching this. Plus, it makes for a great double feature of Gavin O’Connor’s Warrior.